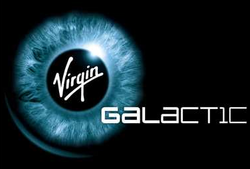 Virgin Galactic is a company within Richard Branson's Virgin Group which is set to become the world's first commercial space travel operator. The company plans to provide sub-orbital spaceflights to the paying public, along with suborbital space science missions and orbital launches of small satellites. Further in the future they plan to offer orbital human spaceflights as well. Virgin Galactic uses a method with two vehicles: a 'mother-ship' in the form of a large fixed wing aircraft which takes-off and lands like a normal airplane and the actual space-vehicle launches from the mothership when she is inflight giving the spacecraft a start-speed and maximum altitude from a 'normal' fixed-wing-aircraft.

Virgin Galactic's public flights will last two and a half hours and currently cost $200,000. The mother ship, VMS Eve, will take off like a conventional aircraft while carrying the VSS Enterprise and her six passengers. At about 15.5km above the earth, the mother ship will air-launch the shuttle.

At this point the hybrid rocket system will fire for about 70 seconds, unleashing "a wave of unimaginable but controlled power" and driving the spaceship to more than 4,000kph - about three times the speed of sound - in a matter of seconds.

When the spacecraft reaches an altitude of 110km - just 10 kilometres beyond the official start of space - the engine will be switched off, leaving the passengers free to celebrate their new status as astronauts.

After just five minutes of weightlessness, the Virgin Galactic pilots will "feather" the wings for a gentle re-entry and, once through the atmosphere, de-feather them for the long glide back to Earth.

In April 2012 at the Global Aerospace Summit in Abu Dhabi, it was announced that the host city, in the United Arab Emirates, will become the world's second spaceport for space tourism.

The announcement came as no surprise to insiders, as Abu Dhabi-based Aabar Investments has been a 32 per cent stakeholder in Virgin Galactic since it invested US$280 million in July 2009, declaring the partnership to be "in line with Abu Dhabi's plans to inculcate technology research and science and to be the international tourism capital of the region". [1]

Founder Richard Branson
Add a photo to this gallery

Retrieved from "https://space.fandom.com/wiki/Virgin_Galactic?oldid=7182"
Community content is available under CC-BY-SA unless otherwise noted.