Uranus (IPA: /jəˈreɪnəs/ or /ˈjurənəs/ or /jɚˈrɑnəs/) is the seventh planet from the Sun. It is a gas giant, the third largest by diameter and fourth largest by mass. It is named after Uranus, the Greek god of the sky and progenitor of the other gods.

NASA's Voyager 2 is the only spacecraft to have visited the planet and no other visits are currently planned. Launched in 1977, Voyager 2 made its closest approach to Uranus on January 24, 1986, before continuing its final journey to Neptune.

Uranus was the first planet to be discovered that was not known in ancient times; although it had been observed on many previous occasions, it was always mistakenly identified as a star. The earliest recorded sighting was in 1690 when John Flamsteed catalogued Uranus as 34 Tauri. Flamsteed observed Uranus at least six more times. The record belongs to a French astronomer, Pierre Lemonnier, who observed Uranus at least twelve times between 1750 and 1771, including on four consecutive nights. (Lemonnier is often[citation needed] called careless or even "sloppy" for this, but it is important to know that he realized 9 of these within a short time of Herschel's discovery and most of his observations occurred at the stationary point in Uranus' orbit.) Uranus is commonly joked on due to its names resemblance to the Anus a part of the human body.

Herschel originally named it Georgium Sidus (George's Star) in honour of King George III of Great Britain. When it was pointed out that sidus means star not planet, he rebaptised it the Georgian Planet. This name was not acceptable outside of Britain. Lalande proposed in 1784 to name it Herschel, at the same time that he created the planet's symbol ("a globe surmounted by your initial"); his proposal was readily adopted by French astronomers. Prosperin, of Uppsala, proposed the names Astraea, Cybele, and Neptune (now borne by two asteroids and a planet). Lexell, of St. Petersburg, compromised with George III's Neptune and Great-Britain's Neptune. Bernoulli, from Berlin, suggested Hypercronius and Transaturnis. Lichtenberg, from Göttingen, chimed in with Austräa, a goddess mentioned by Ovid (but who is traditionally associated with Virgo). The name Minerva was also proposed.[2] Finally, Bode, as editor of the Berliner Astronomisches Jahrbuch, opted for Uranus, after Latinized version of the Greek god of the sky, Ouranos; Maximilian Hell followed suit by using it in the first ephemeris, published in Vienna. Examination of earliest issues of Monthly Notices of the Royal Astronomical Society from 1827 shows that the name Uranus was already the most common name used even by British astronomers by then, and probably earlier. The name Georgium Sidus or "the Georgian" were still used infrequently (by the British alone) thereafter. The final holdout was HM Nautical Almanac Office, which did not switch to Uranus until 1850[citation needed].

In the Chinese, Japanese, Korean, and Vietnamese languages, the planet's name is literally translated as the "Sky king star'" (天王星).[3][4]

Uranus is composed primarily of gas and various ices. The atmosphere is about 85% hydrogen, 15% helium and traces of methane, while the interior is richer in heavier elements, most likely compounds of oxygen, carbon, and nitrogen, as well as rocky materials. This is in contrast to Jupiter and Saturn which are mostly hydrogen and helium. Uranus (like Neptune) is very much similar to the cores of Jupiter and Saturn without the massive fluid metallic hydrogen envelope. Uranus' Blue-Green color is due to the absorption of red light by atmospheric methane. Surface temperature on Uranus's cloud cover is approximately 55 K (−218 °C or −360 °F). The Uranian core has a temperature of about 5,000 K (4724°C), much cooler than the centers of other giants.

One of the most distinctive features of Uranus is its axial tilt of ninety-eight degrees. Consequently, for part of its orbit one pole faces the Sun continually while the other pole faces away. At the other side of Uranus' orbit the orientation of the poles towards the Sun is reversed. Between these two extremes of its orbit the Sun rises and sets around the equator normally.

One result of this orientation is that the polar regions of Uranus receive a greater energy input from the Sun than its equatorial regions. Uranus is nevertheless hotter at its equator than at its poles, although the underlying mechanism which causes this is unknown. The reason for Uranus' extreme axial tilt is also not known. It is speculated[citation needed] that perhaps during the formation of the planet it collided with an enormous protoplanet, resulting in the skewed orientation.

It appears that Uranus' extreme axial tilt also results in extreme seasonal variations in its weather. During the Voyager 2 flyby, Uranus' banded cloud patterns were extremely bland and faint. Recent Hubble Space Telescope observations, however, show a more strongly banded appearance now that the Sun is approaching Uranus' equator. By 2007 the Sun will be directly over Uranus's equator.

Uranus' magnetic field is peculiar since it is not originating from the geometric center of the planet and is tilted almost 60° from the axis of rotation. It is probably[citation needed] generated by motion at relatively shallow depths within Uranus. Neptune has a similarly displaced magnetic field, which suggests the magnetic field is not necessarily a consequence of Uranus' axial tilt. The magnetotail is twisted by the planet's rotation into a long corkscrew shape behind the planet. The magnetic field's source is unknown; the electrically conductive, super-pressurized ocean of water and ammonia once was thought to lie between the core and the atmosphere now appears to be nonexistent[citation needed].

Uranus is different from Jupiter and Saturn in that it has a much lower internal heat source. Both Jupiter and Saturn are radiating more energy than they receive from the Sun because there is still heat inside those planets (hence the colorful atmospheres). For some reason on Uranus that heat source is much lower due to its lower mass with the temperature of its core roughly 5000K compared to 30000K at Jupiter's core and 18000K at Saturn, and was not driving the atmosphere as much. Hence, the atmosphere is much blander.

Uranus has a faint planetary ring system, composed of dark particulate matter up to ten meters in diameter. This ring system was discovered in March 1977 by James L. Elliot, Edward W. Dunham, and Douglas J. Mink using the Kuiper Airborne Observatory. The discovery was serendipitous; they planned to use the occultation of a star by Uranus to study the planet's atmosphere. However, when their observations were analyzed, they found that the star had disappeared briefly from view five times both before and after it disappeared behind the planet. They concluded that there must be a ring system around the planet; it was directly detected when Voyager 2 passed Uranus in 1986. As of 2005, 13 rings had been identified. In December 2005, the Hubble Space Telescope photographed a pair of previously unknown rings. The largest is twice the diameter of the planet's previously known rings. The new rings are so far from the planet that they are being called Uranus's "second ring system." Hubble also spotted two small satellites. One shares its orbit with one of the newly discovered rings. The new data reveals that the orbits of Uranus's family of inner moons have changed significantly in the last decade.

In April 2006, information about two more rings was published, one of them appearing blue and the other red. The rest of the planet's rings appear grey. The blue ring is thought to get its color from being swept by a moon, which may draw away all large debris, leaving only fine dust which refracts light in much the same way the Earth's atmosphere does.

Uranus has 27 known moons. The names for these moons are chosen from characters from the works of Shakespeare and Alexander Pope. The five main satellites are Miranda, Ariel, Umbriel, Titania and Oberon.

The brightness of Uranus is between magnitude +5.5 and +6.0, so it can be seen with the naked eye as a faint star under dark sky conditions. It can be easily found with binoculars. From Earth, it has a diameter of four arc-seconds. In larger amateur telescopes with an objective diameter greater than 12" (30cm) the planet appears as a pale blue disc with distinct limb shading, and two of the larger satellites, Titania and Oberon, may be visible. Even in large professional instruments no details can be seen on its disc. However, infrared studies of its atmosphere using adaptive optics have yielded interesting data in the years since the Voyager flyby.[5] 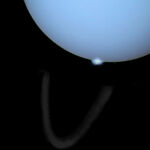 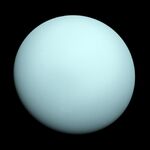 Add a photo to this gallery
Retrieved from "https://space.fandom.com/wiki/Uranus?oldid=10240"
Community content is available under CC-BY-SA unless otherwise noted.