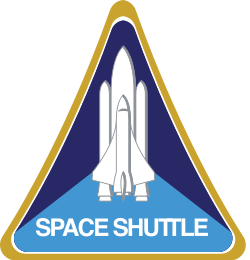 NASA's Space Shuttle, officially called Space Transportation System (STS), was a United States government manned launch vehicle and it retired from service in 2010. The winged Space Shuttle orbiter is launched vertically, usually carrying five to seven Astronauts (although eight have been carried) and up to 50,000 lb (22 700 kg) of payload into low earth orbit. When its mission is complete, the shuttle can independently move itself out of orbit (by means of making a 180-degree turn and firing its main engines, thus slowing it down) and re-enter the Earth's atmosphere. During descent and landing, the orbiter acts as a glider and makes a completely unpowered landing.

The shuttle is the only winged manned spacecraft to achieve orbit and land, and the only reusable space vehicle that has ever made multiple flights into orbit. Its missions involve carrying large payloads to various orbits (including segments to be added to the International Space Station), providing crew rotation for the International Space Station, and performing service missions. The orbiter can also recover satellites and other payloads from orbit and return them to Earth, but its use in this capacity is rare. However, the shuttle has previously been used to return large payloads from the ISS to Earth, as the Russian Soyuz spacecraft has limited capacity for return payloads. Each vehicle was designed with a projected lifespan of 100 launches, or 10 years' operational life.

The program started in the late 1960s and has dominated NASA's manned operations since the mid-1970s. According to the Vision for Space Exploration, use of the space shuttle will be focused on completing assembly of the ISS by 2010, after which it will be retired from service, and eventually replaced by the new Orion spacecraft (now expected to be ready in about 2014).

Retrieved from "https://space.fandom.com/wiki/Space_Shuttle_program?oldid=8904"
Community content is available under CC-BY-SA unless otherwise noted.