SpaceX (Space Exploration Technologies Corporation) is a space transport company headquartered in Hawthorne, California. It was founded in 2002 by entrepreneur Elon Musk, who is the current Chief Executive Officer and Chief Technology Officer.  Musk is also known for his former role as co-founder of Paypal, and his current role as CEO of Tesla Motors.  SpaceX has developed the Falcon 1 and Falcon 9, and Falcon Heavy launch vehicles, the Dragon spacecraft, and two Grasshopper test vehicles.  Their only currently operational launch vehicle is the Falcon 9 version 1.1, and the Falcon Heavy is currently set to take its maiden voyage in 2014.

In order to control quality and costs, SpaceX designs, tests, and fabricates the majority of their components in-house, including the Merlin and Draco rocket engines used on the Falcon launch vehicles and the Dragon spacecraft. In 2006, NASA awarded the company a Commercial Orbital Transportation Services (COTS) contract to design and demonstrate a launch system to resupply cargo to the International Space Station (ISS). On 9 December 2010, the launch of the COTS Demo Flight 1 mission, SpaceX became the first privately-funded company to successfully launch, orbit and recover a spacecraft.  Dragon later berthed with the International Space Station on COTS flight 2, and became the first private company to have a vehicle dock with the ISS.  This completed COTS and awarded SpaceX with the Commercial Resupply Services (CRS) contract which would entail 12 flights of Dragon to supply the ISS and return science equipment.

NASA has also awarded SpaceX a contract to develop and demonstrate a human-rated Dragon as part of its Commercial Crew Development (CCDev) program to transport crew to the ISS.  SpaceX is planning its first crewed Dragon/Falcon9 flight in 2015, when it expects to have a fully certified, human-rated launch escape system incorporated into the spacecraft.

Besides NASA contracts, SpaceX has signed contracts with private sector companies, non-American government agencies and the American military for its launch services. It has already launched, for a paying customer, a low earth orbiting satellite with its Falcon 1 booster in 2009. The company plans to launch its first commercial geostationary satellite in 2013 from a Falcon 9.

Future projects that are in the planning stages or in development include the Falcon Heavy Lift-class booster and a NASA robotic mission to Mars in 2018. The Heavy is based on Falcon 9 technology, and if construction goes as planned, it will be the most powerful rocket in the American arsenal since the Apollo-era Saturn V . Heavy can be used to send a crewed Dragon spacecraft on lunar orbiting missions – such as the Apollo 8 mission; or be used to send a modified unpiloted Dragon on a Mars landing mission. Musk has stated that his intention for the company is to help in the creation of a permanent human presence on Mars. 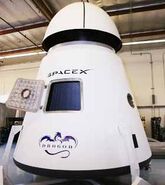 The Dragon capsule
Add a photo to this gallery

Retrieved from "https://space.fandom.com/wiki/SpaceX?oldid=8445"
Community content is available under CC-BY-SA unless otherwise noted.