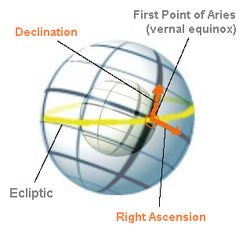 Right ascension (abbrev. RA; symbol α = Greek letter alpha) is the astronomical term for one of the two coordinates of a point on the celestial sphere when using the equatorial coordinate system. The other coordinate is the declination.

RA is the celestial equivalent of terrestrial longitude. Both RA and longitude measure an east-west angle along the equator; and both measure from an arbitrary zero point on the equator. For longitude, the zero point is the Prime Meridian; for RA, the zero point is known as the vernal equinox point (also known as the First Point of Aries), which is the place in the sky where the Sun crosses the celestial equator at the March equinox.

The concept of right ascension has been known at least as far back as Hipparchos who measured stars in equatorial coordinates in the 2nd century BC. But Hipparchos and his successors made their star catalogs in ecliptical coordinates, and the use of RA was limited to special cases.

Retrieved from "https://space.fandom.com/wiki/Right_ascension?oldid=7705"
Community content is available under CC-BY-SA unless otherwise noted.