A nebula is an interstellar cloud of dust, gas and plasma. Originally nebula was a general name for any extended astronomical object, including galaxies beyond the Milky Way (some examples of the older usage survive; for example, the Andromeda Galaxy is sometimes referred to as the Andromeda Nebula). They are the birthplaces of stars/

Nebulae can be classified through illumination:

H II regions are the birthplace of stars. They are formed when very diffuse molecular clouds begin to collapse under their own gravity, often due to the influence of a nearby supernova explosion. The cloud collapses and fragments, forming sometimes hundreds of new stars. The newly-formed stars ionize the surrounding gas to produce an emission nebula.

Other nebulae are formed by the death of stars; a star that undergoes the transition to a white dwarf blows off its outer layer to form a planetary nebula. Novae and supernovae can also create nebulae known as nova remnants and supernova remnants respectively. 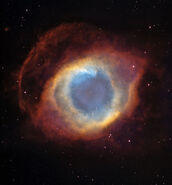 Image of the Helix Nebula

Image of the Carina Nebula