Space Shuttle Independence (honorary Orbiter Vehicle Designation: OV-100), formerly known as Explorer, is a full-scale, high-fidelity replica of the Space Shuttle. It was built in Apopka, Florida, by Guard-Lee and installed at Kennedy Space Center Visitor Complex in 1993. It was built using schematics, blueprints and archival documents provided by NASA and by shuttle contractors such as Rockwell International. While many of the features on the replica are simulated, some of the model's core parts, including the Michelin tires used on the landing gear, are authentic to the Space Shuttle Program.[1] The model is 122.7 ft (37.4 m) long, 54 ft (16 m) high, and has a 78 ft (24 m) wingspan.

Internal details of the mock-up are not remarkably accurate, though the size and scope of the payload bay is correct.[citation needed] Externally, the mock-up features simulated thermal protection system tiles (bearing numbers, as the genuine flight articles used to), paneling that looks like reinforced carbon–carbon (RCC) panels on the leading edges of the wings, and actual Michelin tires on the landing gear which were flown in space. Handling points are also shown, but the external detailing does not extend to the inclusion of thermal blankets.[2]

Independence, then known as Explorer, was displayed at the Kennedy Space Center Visitor Complex atop cement pilings and secured with steel cabling. Visitor access was provided by a gantry-style tower with ramps and an elevator for accessibility. Inside, visitors could view a mock-up payload, a mannequin wearing an early model of the orange launch/entry pressure suit used by shuttle astronauts, and a mock cockpit with controls and instruments. Adjacent to Explorer were two solid rocket boosters mated to a full-size mock-up of an external tank (originally used by Stennis Space Center for fit tests).[3][4]

Aside from entry through the mock-gantry, no other points of entry were available.

Due to KSC receiving the retired Atlantis, Space Shuttle Explorer was removed from KSC Visitor Center December 11, 2011, by Beyel Bros. and moved on a 144-wheel trailer by truck to the Vehicle Assembly Building turning basin dock adjacent to the Launch Complex 39 Press Site to be loaded onto a barge bound for Johnson Space Center's Space Center Houston visitor center in spring 2012. Once there, the inaccurate interior will be refurbished to accurate museum quality and put on display.[2]

The original moving plans were to remove the wings for transportation, however NASA and Delaware North Resorts & Hospitality, which manages operations of the Visitor Center, feared images of a space shuttle with no wings could become iconic of the Shuttle program's ending and ignite the public, undermining NASA's work to bring the Orion/SLS system into people's minds forgetting the shuttle. Thus, to accommodate the move, several light poles along State Road 3 (SR 3) and SR 405 were taken down, and the shuttle itself was lifted by hydraulic jacks over the guard building on SR 3.

Johnson Space Center hosted a celebration for the arrival of the Explorer orbiter. The Shuttlebration started on June 1, 2012, at the southeast corner of Clear Lake by the Nassau Bay Hilton Hotel. The festivities, so far, have included the arrival of the Shuttle at the dock. This was the largest item to arrive at the dock since the Saturn V arrived for display in 1977.[5][6] A competition to rename Explorer opened on July 4, 2013, and concluded on September 2, 2013, with over 10,000 entries. The replica's new name, Independence, was revealed on October 5, 2013.[7][8] 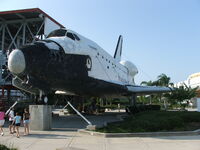 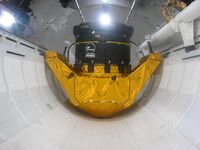 Mock-up of a Hughes Communications satellite inside Explorer, similar to one carried on STS-49