Jupiter’s moon Ganymede is proving to be a fascinating world. Not only is it the largest moon in our solar system, bigger than the planet Mercury and the dwarf planet Pluto, but NASA’s Hubble Space Telescope has found the best evidence yet for an underground saltwater ocean on Ganymede. The ocean is thought to have more water than all the water on Earth's surface. Ganymede’s ocean is estimated to be 60 miles (100 kilometers) thick – 10 times deeper than Earth's ocean – and is thought to be buried under a 95-mile- (150-kilometer-) thick crust of mostly ice. Identifying liquid water is crucial in the search for habitable worlds beyond Earth and in the search for life as we know it.

The moon was discovered by Galileo when he pointed a telescope at Jupiter. Thus, Ganymede and the four other main moons of Jupiter are sometimes called the Galilean Moons.

Ganymede is the only moon known to have its own magnetic field – a discovery made by NASA’s Galileo spacecraft in 1996. The magnetic field causes auroras, which are ribbons of glowing, hot, electrified gas, in regions circling the north and south poles of the moon. Because Ganymede is close to Jupiter, its magnetic field is embedded in, or lies within, Jupiter’s magnetic field.

When Jupiter’s magnetic field changes, the auroras on Ganymede also change, “rocking” back and forth. It was by watching the rocking motion of the two auroras, that a team of scientists led by Joachim Saur of the University of Cologne in Germany came up with the idea of using the Hubble space telescope to learn more about the inside of the moon.

Several spacecraft have performed close flybys of Ganymede: two Pioneer and two Voyager spacecraft made a single flyby each between 1973 and 1979; the Galileo spacecraft made six passes between 1996 and 2000; and the Juno spacecraft performed two flybys in 2019 and 2021. No spacecraft has yet orbited Ganymede, but there have been multiple proposals to do so, including the JUICE mission which is currently under construction (as of 2021).

The Jupiter Icy Moon Explorer (JUICE) will be the first to enter orbit around Ganymede itself. As of 2021, JUICE is under construction, with launch planned for August 2023. It is intended to perform its first flyby of Ganymede in 2031, then enter orbit of the moon in 2032. It will de-orbit and crash into Jupiter when the spacecraft fuel begins to run out, probably in 2034, to avoid potential contamination of Ganymede's subsurface ocean (a form of planetary protection). 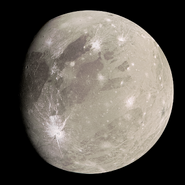 Ganymede photographed by Juno in 2021