There is also an asteroid called 106 Dione.

Dione (dye-oe'-nee, IPA /daɪˈɔʊni/, Greek Διώνη) is a moon of Saturn discovered by Giovanni Cassini in 1684. It is named after the goddess Dione of Greek mythology who (with Zeus) created Aphrodite. It is also designated Saturn IV.

Cassini named the four moons he discovered (Tethys, Dione, Rhea and Iapetus) Sidera Lodoicea ("the stars of Louis") to honour king Louis XIV. Astronomers fell into the habit of referring to them and Titan as Saturn I through Saturn V. Once Mimas and Enceladus were discovered, in 1789, the numbering scheme was extended to Saturn VII.

The names of all seven satellites of Saturn then known come from John Herschel (son of William Herschel, discoverer of Mimas and Enceladus) in his 1847 publication Results of Astronomical Observations made at the Cape of Good Hope ([4]), wherein he suggested the names of the Titans, sisters and brothers of Cronos (the Greek Saturn), be used.

Dione is composed primarily of water ice, but as the third densest of Saturn's moons (aside from Enceladus and Titan, whose density is increased by gravitational compression) it must have a considerable fraction of denser material like silicate rock in its interior.

Though somewhat smaller, Dione is otherwise very similar to Rhea. They both have similar compositions, albedo features and varied terrain, and both have dissimilar leading and trailing hemispheres. Dione's leading hemisphere is heavily cratered and is uniformly bright. Its trailing hemisphere, meanwhile, contains an unusual and distinctive surface feature: a network of bright, wispy streaks on a dark background that overlay the craters, indicating that they are newer. These are now known to be ice cliffs.

Until the Cassini probe flyby of December 13, 2004, the origin of the bright wispy material was obscure, in part because the only photographs of it had been taken from a great distance. All that was known was that the material has a high albedo and is thin enough that it does not obscure the surface features underneath. One hypothesis was that shortly after its formation Dione was geologically active, and some process such as ice volcanism resurfaced much of its surface, with the streaks forming from eruptions along cracks in Dione's surface that fell back to the surface as snow or ash. Later, after the internal activity and resurfacing ceased, cratering continued primarily on the leading hemisphere and wiped out the streak patterns there.

However, the latest images from Cassini show that this hypothesis is incorrect, and that the wisps are in fact not ice deposits at all, but rather the bright ice cliffs created by tectonic fractures; Dione has been revealed as a world riven by enormous fractures on its trailing hemisphere.

The Cassini orbiter performed a closer flyby of Dione (500 km) on October 11, 2005, and captured oblique images of the cliffs, showing that some of them are several hundred metres high. 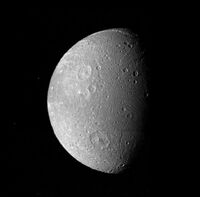 Dione's icy surface includes heavily cratered terrain, moderately cratered plains, lightly cratered plains, and areas of tectonic fractures. The heavily cratered terrain has numerous craters greater than 100 kilometers in diameter. The plains area tends to have craters less than 30 kilometers in diameter. Some of the plains are heavily cratered while others are not. Much of the heavily cratered terrain is located on the trailing hemisphere, with the less cratered plains area existing on the leading hemisphere. This is opposite from what some scientists expected; Shoemaker and Wolfe proposed a cratering model for a tidally locked satellite with the highest cratering rates on the leading hemisphere and the lowest on the trailing hemisphere. This suggests that during the period of heavy bombardment, Dione was tidally locked to Saturn in the opposite orientation. Because Dione is relatively small, an impact causing a 35 kilometer crater could have spun the satellite. Since there are many craters larger than 35 kilometers, Dione could have been repeatedly spun during its early heavy bombardment. The pattern of cratering since then and the bright albedo of the leading side suggests that Dione has remained in its current orientation for several billion years.

Like Callisto, Dione's craters lack the high relief features seen on the Moon and Mercury; this is probably due to slumping of the weak icy crust over geologic time.