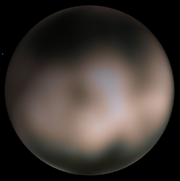 Charon is a moon of Pluto.

It was the only moon in orbit around Pluto before Nix and Hydra were discovered in 2006. Charon and Pluto orbit a common barycenter outside the surface of Pluto; this causes many astronomers to categorize the two as a Double planet (or even double dwarf planet).Charon, is the largest of the five known natural satellites of the dwarf planet Pluto. It has a mean radius of 606 km. Charon is the sixth-largest trans-Neptunian object after Pluto, Eris, Haumea, Makemake and Gonggong.