A carbon planet, also referred to as a diamond planet or carbide planet is a theroretical type of terrestrial planet proposed by Marc Kuchner with internal layers of diamond many kilometres thick. The diamond-rich planets could form from the dusty protoplanetary discs found around many stars, if they are rich in carbon and poor in oxygen. That kind of planet would have to develop differently from Earth, Mars and Venus, so-called silicate planets made up mostly of silicon-oxygen compounds.

Current theories predict that such planets would likely have an iron-rich core similar to the known terrestrial planets. Above that would be a thick layer of silicon carbide and titanium carbide, and a layer of carbon above that. The carbon would be in the form of graphite, possibly with a layer of diamond at the bottom if the planet is large enough for there to be sufficient pressure. The surface would be rich in hydrocarbons and carbon monoxide. Life might be possible on such a planet, especially if water is present, but the highly reducing environment could result in metabolism taking the opposite approach to that of terrestrial life with oxygen-rich compounds being taken in as food to react with the carbon-rich atmosphere.

Planets orbiting the pulsar PSR 1257+12 may be carbon planets, possibly forming from the disruption of a star that produced carbon as it aged. Other good candidates for carbon planets might be those located near the galaxy's center, where stars have more carbon than the sun. 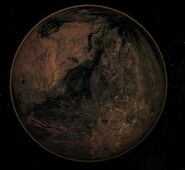 Add a photo to this gallery

Retrieved from "https://space.fandom.com/wiki/Carbon_planet?oldid=8239"
Community content is available under CC-BY-SA unless otherwise noted.