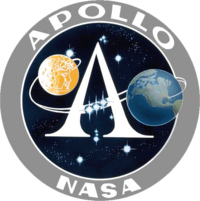 The Apollo Program was a human spaceflight program undertaken by NASA during the years 1961–1975 with the goal of conducting manned moon landing missions. In 1961, President John F. Kennedy announced a goal of landing a man on the moon by the end of the decade. It was accomplished on July 20, 1969 by the landing of astronauts Neil Armstrong and Buzz Aldrin, with Michael Collins orbiting above during the Apollo 11 mission. Five other Apollo missions also landed astronauts on the Moon, the last one in 1972. These six Apollo spaceflights are the only times humans have landed on another celestial body. The Apollo program, specifically the lunar landings, is often cited as the greatest achievement in human history.

Apollo was the third human spaceflight program undertaken by NASA, the space agency of the United States. It used Apollo spacecraft and Saturn launch vehicles, which were later used for the Skylab program and the joint American-Soviet Apollo-Soyuz Test Project. These later programs are thus often considered to be part of the overall Apollo program.

The goal of the program, as articulated by President Kennedy, was accomplished with only two major failures. The first failure resulted in the deaths of three astronauts, Gus Grissom, Ed White and Roger Chaffee, in the Apollo 1 launchpad fire. The second was an in-space explosion on Apollo 13, which badly damaged the spacecraft on the moonward leg of its journey. The three astronauts aboard narrowly escaped with their lives, thanks to the efforts of flight controllers, project engineers, backup crew members and the skills of the astronauts themselves.

The program set major milestones in the history of human spaceflight. This program stands alone in sending manned missions beyond low Earth orbit. Apollo 8 was the first manned spacecraft to orbit another celestial body, while Apollo 17 marks the time of the last moonwalk and also the last manned mission beyond low Earth orbit. The major space exploration milestones leading up to the moon landing include: (Note: not all of these were accomplished by NASA.)

The program spurred advances in many areas of technology peripheral to rocketry and manned spaceflight. These include major contributions in the fields of avionics, telecommunications, and computers. The program sparked interest in many fields of engineering, including pioneering work using statistical methods to study the reliability of complex systems made from component parts. The physical facilities and machines which were necessary components of the manned spaceflight program remain as landmarks of civil, mechanical, and electrical engineering. Many objects and artifacts from the program are on display at various locations throughout the world, notably at the Smithsonian's Air and Space Museums.

For Information On The Apollo Missions: See List of Apollo missions.